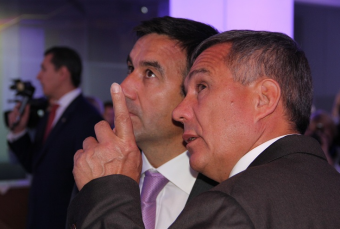 Nikolai Nikiforov called the new industrial park of 23K square meters the best technology park in the country. The residents of the IT-Park have everything to win the world - he wrote on Chelny business incubator's wall of fame.

The construction costs 1.38 B RUR that was allocated by the budgets of the Russian Federation and the Republic of Tatarstan in equal volumes.

I remember how I defended this project with Rustam Minnikhanov in Moscow, - Nikolai Nikiforov said in his welcoming speech. – And today, a year later, we present it. The President of Russia set a very ambitious goal - to create 25 M high-tech jobs, the Minister reminded. The launching of the second industrial park, he said, suggests that Tatarstan makes most intensive steps to succeed. Today there are 22 residents in the building. It is assumed that the total number of employees will be 1.6 K by 2014 and 60 IT-companies will become the residents of the second site. The average salary of employees will be 30 K RUR. The total annual turnover is expected to be 1.5 B RUR in 2013, and tax payments to the budget - 230 M RUR.

The main thing today is that the idea is in demand, sell your idea over the world - Nikolai Nikiforov appealed to the residents of the Technopark. - Do not limit yourself to the Republic of Tatarstan and the Russian Federation. You should be in demand everywhere. You have all necessary conditions here.

Tatarstan President Rustam Minnikhanov, in turn, thanked Nikolai Nikiforov: He convinced us that information technologies are in demand, - he said. – IT-Park in Kazan has become the most successful project in the country. Products created there are sold in more than 50 regions of Russia. There should be a lot of such facilities.

Rustam Minnikhanov noted that the project would not have happened without Sergei Kogogin and Vasil Shayhraziev. The first one sold an unfinished building of KAMAZ data center to the republic for a symbolic one dollar, the second one completed the construction in record time. Tatarstan is not just building industrial parks, the republic creates the IT-cluster, said the President at the opening ceremony, housing to be built for IT professionals in Naberezhnye Chelny, a branch of the Graduate School of Information Technology and Systems (ITIS) for IT education has been opened jointly with Kazan Federal University in Naberezhnye Chelny.

The opening was attended by the first 30 students of Chelny branch, 20 of which were given grants from the IT-Park, the Minister of Information and Communications of Tatarstan Roman Shaikhutdinov said.

In addition, special IT-classes to educate students how to set up start-ups were created on the basis of three schools (gymnasium No.26 and 36, and Pushkin Lyceum). Specially designed bus route No.5 allows pupils and students to get the IT-park.

We will keep on creating of the IT-cluster, said the President of Tatarstan at a press conference – the Republic discusses prospects for cooperation with Carnegie Mellon University (USA) for IT professionals’ training, an International Educational Center can be created in Tatarstan. We create not just an IT-cluster, we create an international cluster - Minnikhanov said. - Of course, we need an international partner. The representatives of this university visited us. We scheduled a return visit.

This site is very important for the whole country – Minnikhanov explained. - And the Russian government supported our idea.

Partizan.info, a resident of IT-Park, acquired the patent