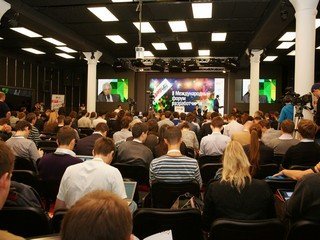 More than 700 Russian developers, experts, world renowned manufacturers of mobile devises and organizations that accumulate and develop advanced technologies, met on the 5th of October at Apps4All Forum (Digital October center) for the second time this year to discuss the prospects for the development and distribution of multi-platform applications.

The II International Forum of developers Apps4all was attended by leading organization of the IT-market, including LG, Intel, Huawei, RVC, Qualcomm, Microsoft, The Center for Entrepreneurship USA- Russia, MMSCO, Opora of Russia, Softline, Runa Capital, the Skolkovo Foundation, the Department of Science, Industrial Policy and Entrepreneurship of Moscow, Zvorykinsky project.

The II Apps4All Forum was opened with a plenary with Mark Shmulevich (the Deputy Minister of Communications and Mass Communications of the Russian Federation), Sergei Borisov (the President of public organization of small and medium business Opora of Russia), Jay Koo (the Head of Smart TV in CIS and Baltic, LG), Igor Agamirzian (the CEO of RVC), Sergey Belousov (the Senior Partner of venture fund Runa Capital), Alexey Komissarov (the Head of the Department of Science, Industrial Policy and Entrepreneurship of Moscow).

It is important that Russia has huge potential to be among the world leaders in mobile applications development, - Mark Shmulevich said, - it is a great chance for all those who participate in Apps4all Competition to create a product that will go globally, become popular and allow people to do what they've done before much easier and simpler. I wish you all good luck. Let's increase the number of Russian mobile applications’ users in several times in a few years!

Touching upon the common mistakes of mobile applications’ developers, Sergey Belousov said that startups who just want to make money get nothing as a rule. The project must necessarily have a noteworthy mission: it must solve real problems. This is one of the main criteria that we follow in deciding whether to invest in the company or not.

The forum participants learned how to attract investors to their projects by visiting the discussion club Investment and market support. Addressing the participants of the Forum, Igor Borovikov, the chairman of Softline’s board of directors said: We live in the age of mobility. The fact that smartphones and tablets have become a major source of access to the information offers huge prospects for developers. Pay more attention to marketing and go globally. The market of mobile applications gives you all necessary conditions.

As a part of the discussion panel LG Smart TV, organized by LG Electronics, a platform LG Smart TV was presented as well as the most popular services and applications offered to Russian users of LG TVs, and own developments in information technology - multimedia cloud service LG Cloud.

Jay Koo, the Head of Smart TV LG Electronics in CIS and Baltic countries, said that the Apps4All Forum is very important to LG since it's an innovative platform for connecting people, business needs, and most importantly for ideas. It is Smart TV technology that has opened applications the access to the big screen and, developing over the past two years, it became a stable trend in 2012. Russia, CIS and Baltic countries are strategic market for LG, and that is why the ensuring local users in these countries with the best set of Smart TV applications is very important to us.

In addition, the official opening of the Competition of TV applications LG Smart TV Apps Contest 2012 took place within the framework of the II Apps4all Forum. The competition was held for the first time in Russia in 2011. Now, in addition to Russia, the following countries participate in the competition: Ukraine, Kazakhstan, Belarus, Latvia, Lithuania and Estonia.

The representatives of leading software companies in the section of Russian Apps4All developers’ community, including the winner of the first Apps4all contest Igor Barinov, shared their invaluable experience with the Forum participants. The developers presented to the competent experts the designs of their mobile applications within startups’ battle Win people's love, organized by Apps4all together with the Startup Afisha. The participants of the startups’ battle could use any form of creative presentation: video, song, dance, drama, flashmob - anything except banal voiceover of PowerPoint slides. Following the vote of the forum members, GFRANQ team became the winner. It presented a project that allows handling photos with professional filters in a few simple steps.

Russia's largest banks shared information about one of the most promising areas of the industry which is the development of applications for the financial sector, and the best Russian media applications were presented in the section Digital publishing - mobile platforms for digital content.

The event ended with a prize drawing from Apps4all Forum partners: flash drives, anti-stress and T-shirts from RIM, webcams and mice from Oklick, and Intel presented Smartphones Megafon SP-A20i Mint to the most talented and creative designers.

The organizers of the II Apps4All Forum were the Polylogue and Apps4All. The general media partners of the event were Mail.Ru Group and Computerbild magazine.