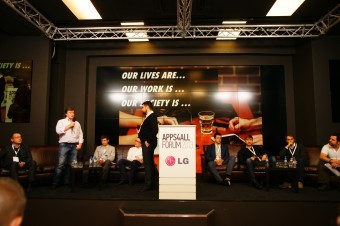 In October, 11 of the field “Digital October” has been held the 4th International Forum for mobile developers “Apps4All” – one of the most important events in the sphere of mobile applications developments. The unique business program, contest of city mobile applications have led to the field “Digital October” more than 1000 representatives of mobile ecosystem, and also specialists of the largest IT-companies and leading experts of the branch.

The 4th International Forum for mobile developers “Apps4All”is a unique field, at which have been discussed questions concerning creation, distribution, development and promotion of applications. This time the Forum has combined leading representatives, specialists and experts of the branch, who could exchange their experience, discuss business-models and execute new contracts.

The Forum’s program included 4 sections, in each of them speakers and experts have shared their experience in the sphere of development technologies and monetization of mobile applications. The key subjects for discussion became “Perspectives of cooperation between applications developers and mobile communications operators”, Performance marketing and mobile applications promotion”, “Presentation of advertising platform AdCamp”, and also “Mobile banking”.

A special attention has been paid to the presentation of advertising platform “AdCamp”, during which Maksim Osipov (Imho vi) and Nikolay Davydov (iTechCapital) have told about the fact that in future they will offer advertisers advertisement positioning with use of “AdCamp” technologies. The positioning system will work with all mobile advertising networks and applications owners, translating advertisement in mobile Internet, applications and video.

“As compared to other advertising channels – print press, radio, outside advertisement, the system of mobile applications’ promotion has the exact and close to the end result KPI – the amount of applications installations. If to take into account that most applications are paid, then in this case we have a situation, when the end result of advertising efforts on applications promotion is measured by real sales. This creates conditions for development of applications advertisement market on principles of transparent and opening”, - commented Pavel Maluev, Chief of the department, “Polylog”, the section moderator.

Also, within the Forum limits have been conducted results of the “MoscowAppContest’13” for the development of the best application for the Moscow city. Among the great amount of projects have been selected 2 best applications. The first place has taken Maksim Kanevsky, “MAMNADZOR” (“Gaika Group”), the second one has taken Yaroshevich Vasil’ “Theatre bill” (“Culture technologies”) and the third place has taken Veronica Orlovskaya, “Barierov.NET”. Owner of the “gold” has received from the “Google: Company not only the money prize in amount of 150K RUB, but also the trip to Campus Google in Tel-Aviv.

One of the central program items became discussion panel LG Smart TV – Era of smart TV”, within the limits of which specialists of the company LG have told about the process of development and applications verification for platform “Smart TV” and announced a new platform “webOS”. The main keynote of the discussion panel became the application contest announcement for “smart” TV-sets LG Smart TV Apps Contest 2013-2014, which will be held since October 11, 2013 till March 14, 2014. All volunteers can take part in the contest: both young specialists and professionals in the sphere of applications from Russia, CIS countries and East-countries, ready to present their applications, developed, tested and launched on the platform LG Smart TV in this period of time.