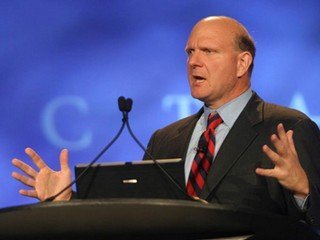 The development of IT-industry and cooperation in educational and research activities were discussed by the Deputy Prime Minister Vladislav Surkov and Microsoft CEO Steve Ballmer. In addition, they raised the questions of formation and protection of databases, cloud technologies and the fight against piracy.

In May, Microsoft launched its own center of research and development (R & D) in Skolkovo. According to the original plan, the Centre had to be concentrated on the development of Microsoft Dynamics software solutions for business management. Now, the company plans to add some new directions of work in the center for the development of cross-platform solutions for smartphones and tablet computers to broadcast multimedia content in real time.

The meeting participants paid special attention to the joint projects of Microsoft and the Skolkovo Foundation. A document on the expansion of the previous agreement on the establishment of Microsoft R & D Center (the center for research and development activities) in the Innovation Center Skolkovo was signed on the eve.

During the meeting Surkov also stressed that the work of Microsoft R & D Center in Skolkovo will create more jobs for Russian IT-specialists. It is assumed that the number of experts of the center will be doubled by 2015.

The Deputy Prime Minister also said that the Russian government is ready to support Microsoft projects in the country.

Rosneft plans to become a resident of Skolkovo