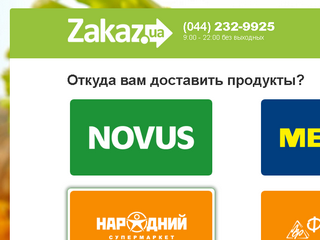 Ukrainian company Zakaz.ua has recently closed an investment deal, the amount of which was not disclosed. This is the first stage part of the first round, which will focus on the growth of the company's business in Ukraine and its entering the Russian market. This was told by Denis Dovgopoliy (BVU Group) during SVOD in California.

The company’s investor was the President of Best Business Group holding (BBG) Yevgeniya Dubinskaya. One of the largest companies of the holding is UMT Company (Ukrainian Mobile Technologies). This is the second investment of Yevgeniya in Ukrainian startups. A deal of $75M with A-Reality project, an augmented reality technology developer, was closed in February.

Zakaz.ua was founded in January 2010 by Yegor Anchishkin. The project was created at its own expense, and later it acquired an investor (Internet Invest of Alexander Olshansky). The company offers an online service to deliver products from popular supermarket chains (Novus, Metro, Furshet, etc.).

Zakaz.ua often wins in various rankings: for example, iForum-2013 announced it as the best startup in Ukrainian Startup Rating, and it was recognized as the best project in the Innovative Solution category of Ukrainian E-Commerce Awards.

The rating of Ukrainian Startups 2012