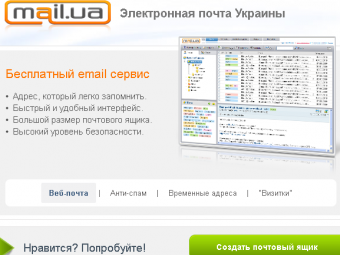 Mail.ua domain will be used for the mail service of Mail.Ru Group in Ukraine, and the service already has Ukrainian interface. All 300K Ukrainian service users will be transferred to Russian postal service.

The amount of transaction is not officially called. As newspaper Internetua.com writes citing a source, Internet Invest Group sold Mail.ua mail service for half a million dollars.

We will show and explain everything to the users. They will not experience any difficulties, - press spokesman of Mail.Ru Group told RIA Novosti.

Mail.Ru Group Company, with its office in Kiev, has long been promoting its services in Ukraine, translating some of them into Ukrainian.

The expansion in CIS markets and in Ukraine in particular is also practiced by a major Russian Internet company Yandex. For example, Yandex has yandex.ua domain, which is a localized version of the portal.

Google also has a localized version of its service for the Ukrainian market. The search engine of the company is available at google.ua google.com.ua.

According to IFRS, Mail.Ru Group's revenue in the first quarter of this year increased by 45% compared to the same period of 2011 and amounted to $160.3M.

The head of Mail.Ru Group rewards its employees for received patents