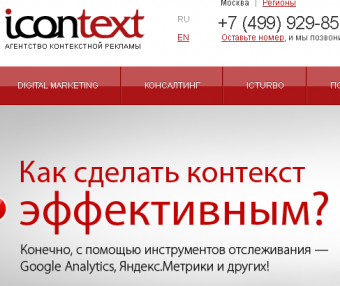 The Fund iTech Capital acquired a bit more than 25% of shares of one of the largest independent online-agencies in Russia iConText from a commercial director of Yandex Lev Glejzer. Te amount of a deal is not disclosed.

This is the third investment in a segment of online advertisement and searching optimization for iTech Capital. In April 2012 the Fund invested $10M in development of search promotion system SeoPult, and in April 2013 invested $3,5M in the company Garpun (automatic system of context advertisement management).

iConText is one of the largest independent online-agencies in Russia. Its clients are more than 650 companies, including Ozon, UniCredit Bank, Sedjmoy Continent, Avito, Euroset. Under the Agency`s control are also shares in four companies capital: Internet-agency Registratura.ru, agency of Internet-marketing Webprofiters, agency of a searching optimization iSeo, SMM-agency Sociorama. Amount of the group iConText in 2012 was 2B RUB. In June, 2008 in structure of shareholders iConText came the Fund ru-Net by Leonid Boguslavsky – he and Maria Chernitskaya own the controlling interest of the company. And now the iTech Capital owns the blocking shares, the rest shares belong to iConText management.

According to investment director of iTech Capital Nikolay Davydov, in future the Fund considers a possibility of unifying advertising assets in one media group.