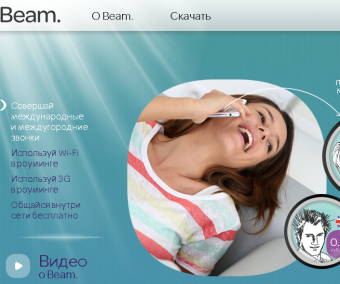 MTT Group announces about the international service Beam launch – a simple and convenient product for communication, which allows making profitable calls via Internet to mobile and city numbers all over the world.

Beam is launched as a free application for mobile devices. At the moment the Beam application distributes for devices on the basis of Android, and in the near future will appear version for iOS. The application possesses a convenient and expressed interface, for development of which has been attracted the famous English design company. Besides using convenient, designers had to make an application to be significantly different from all the existing on the market and taking well in all the countries of existing.

The service Beam is a project, created in a close cooperation of efforts of several companies, entering the MTT Group. “MTT Innovations” have fully developed the interface part and a core of VoIP-application; thanks to Finnish company MTT Oy, Beam received an opportunity to render services all over the world. Also Beam uses VoIP-platform from MTT, which provides calls routing and billing. Own multiservice network MTT, agreements with the largest operators all over the world and tuned technological base provide the Beam with high quality of communication and lower costs than competitors have, both in Russia and globally. For calls is required any access to Internet, for example, via Wi-Fi networks.

One of the most visible differences of a new service from analogues solutions became a possibility of a clear identification of a call. Such function is available without any paid options and does not require additional adjustment. Herewith all calls between users of the Beam are free.

Beam is a service of secured communication. In its development significant attention has been paid to provision of confidentiality and negotiations secure.

“Initially Beam has been developed as International service: it has multi-currency of payments and Multilanguage interface. For each country and region these service and interface are adapted. At the start the main growth we expect not only in Russia, but also in countries of South-East Asia, South America, Arabic region. During 2014 we expect to get up to 5 million of downloads of our application”, - said Artyom Litvinov, director general of the company “MTT Innovations”.