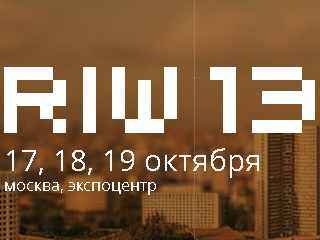 In October 17, 2013 in Moscow Expocenter has been conducted the opening of the conference RIW-2013 and exhibition INTERNET-2013.

Chief of the Rospechat’ Mikhail Seslavinsky has named the RIW-2013 the significant event in the industry. “On behalf of the Federal agency on press and mass communications we always support such events and try to support humanitarian segment in Internet. In 2013 we have financed about 50 sites on the total amount of about 40M RUB. Notwithstanding the strained budget of the 2014 year, I hope that we will continue this work”, - said he.

“Earlier it has been a sphere, where young, energetic, brave and innovation people feel good”, - noted Mr.Volin. “Nowadays Internet became mass, and increase comes from older people, citizens of back country and small towns. Audience of Internet thus becomes more conservative. Conservative inquiry of the Internet audience influences what happens in the industry itself”, - considers the deputy Minister. Namely with this, according to Mr.Volin, are connected results of social quizzes, in accordance to which society supports strengthening of the network regulation. This is the results of a new and more conservative audience come, and it is important to consider it”.

After the official opening in seven parallel flows started sections, in the course of which have been discussed questions in various activity spheres of Russian Internet: e-commerce, advertisement and marketing in network, modern technologies and web-development, information security, legal regulation of Ru.net and etc.

Within the work of the section “Ru.net today: Economy and Audience” Dmitry Chistov (The Runet) presented the investigation of the National Research University “Higher School of Economics” and RAEC “Ru.net economy”, Svetlana Borisova from the FOM (Public Opinion Fund) has presented results of the latest quizzes of the Fund, Inessa Ishunkina from TNS has told about audience indexes in Ru.net of September this year, and Marina Nikerova (Technical Center Internet”) has spoke with a report about the role of TCI in the Ru.net economy, having said about important changes of the surfing picture in Internet, which will come together with upcoming launch of new domains.

The current discussion about the role of SMM for brand and about how to measure efficiency of the agency work, has taken place on the section “Social field: publics vs agencies vs brands: fight!”. In the discussion have participated representatives of all three sides, among which have been Aram Danielyan (Unilever), Mikhail Kazakov (Pichesky), Arseny Ashomko (Socialist), Albert Usmanov (RIA Novosti), Semen Boyarsky (Pepsico) and others.

This day in the block “New Media” has been held section “Trend of social networks: users went offline. Hypothesis or truth”. Experts, among which have been Yekaterina Turtseva (Vympelcom), Lina Udovenko (Advertos), Oleg Barmin (SUP Media), Maria Vyglezhanina (MDK CreativeAgency) anf others, have discussed trends and perspectives of the SMM branch, problems, which have to solve digital-agencies and their clients, and laso behavior and perception of users in social networks: why the audience prefer likes, but not comments, and which content will be actual always.

At the block conference “E-commerce” have been discussed actual problems and the branch indexes, and leaders of the market have presented to the RIW-2013 participants’ attention cases from real practice. The most bright became the speech of the director general OZON.ru Aleksey Timonin, who sayd about how the OZON learned to sale goods for children and their mothers. And director general of the “EE Media” Yevgeny Khata surprised everybody by provocative statement “Growth on e-commerce market stopped”. According to him, nowadays the only one exit is to “buy the enemy”.

In the course of the section “E-commerce for Startupers” have been announced main mistakes, which make young Internet stores: publish only one photo of a good, copy models of other stores, do not understand and incorrectly estimate their audience. The main thing, according to experts, is to build a clear strategy. Ilya Boltnev (Mail.ru) has in details told about promotion channels for e-commerce, and Timofey Shikolenkov (Audiomania) has specified the main problem of the market – logistics, because participants of the market falsely attract to this problem solution the third parties recourses.

The section “Development experience of mobile applications based on open data” has been opened by Dmitry Bekhterev (The Department of Information Technologies of Moscow). According to him, nowadays the department conducted development of more than 80 applications, which will bring benefit to the city. Dmitry Tarasov (Tarasov mobile) has said the opinion that at the moment it is better to create applications for narrow audience, because all mass applications have already been created. According t the section participants, the success guarantee for founders of applications is to define audience and its needs, and also find a large partner.

Participants of the section “Branch right: Control vs Safety” have tried to find compromises between freedom of users and the Government’s wish to control everything”. The main speakers were Aleksey Goreslavsky (Afisha-Rambler) and Irina Levova (RAEC). According to Aleksey, in questions of a right, business should take the compromises niche between the Government and society.

In parallel in the Presentation Hall during the first day has been conducted award of the project “Innovations Alleys” and Awards in the sphere of IT-journalism. In the evening after the ceremony of a solemn start of applications take for the award “Dot-journalism” from RU-CENTER and RAEC deserved prizes have received laureates of the Media award of Ru.net 2013.

It is important to remind, that the Russian Internet Week (RIW) is conducted in Moscow every year and traditionally attracts leaders of Russian business, experts and specialists of the branch, public figures and Internet users, IT-experts of CIS countries and far abroad. This year RIW is conducted in October, 17-19 in the Expocenter.

Results of the RIW-2013 have been summarized