Results of the RIW-2013 have been summarized 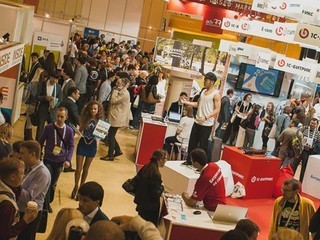 In October, 19 has ended the most important and expected Internet-event of the autumn – the Russian Internet Week-2013 (RIW-2013)/. The conference and exhibition “Internet-2013” have been conducted for three days, in October, 17-19 in the Expocenter on Krasnaya Presnya.

More than 15 thousand participants have visited the main Internet-event of the autumn. Three days on the field have been conducted in the mode of intense work. The Chief of Rospechat Mikhail Seslavinsky has named the RIW-2013 a significant event in the industry. The field for the event still remains the key place for meetings and dialogue for all representatives of the branch, who directly contribute to improvement and development of the branch in mutual progressive key.

From the positive side has been noted, that Internet every day becomes more available not only to young people, but also to representatives of middle and senior age groups. “Initially Internet has been the sphere, where young and brave innovative people felt good”, - noted Aleksey Volin, deputy the Ministry of communications and mass media. Nowadays Internet became mass, and people of older age, small towns and country citizens give increase today. Audience of Internet thus becomes more conservative. The conservative inquiry of the Internet audience influences activity in the industry”. Such increase has been positively noted by the authority representative. There is no sense to doubt in Mr.Volin’s words, proved the visitors of the exhibition, at which have taken part not only young specialists and users, but also mature and vet players of the Interne-industry and users with experience.

After the official opening in seven parallel flows have passed sections, in the course of which have been discussed questions of various activity spheres of Russian Internet: e-commerce, advertising and marketing in network, modern technologies and web-development, information security, legal regulation of Ru.net, etc.

On the block-conference “E-commerce” have been discussed actual problems and the branch indexes, and leaders of the market have presented to participants of the RIW-2013 cases from the real practice. The brightest became the speech of the director general OZON.RU Aleksey Timonin, who has told about how the OZON learns to sell goods for children and their mothers.

Participants of the section “Branch right: Control vs Safety” have tried to find compromises between freedom of users and the Government’s wish to control everything”. The main speakers were Aleksey Goreslavsky (Afisha-Rambler) and Irina Levova (RAEC). According to Aleksey, in questions of a right, business should take the compromises niche between the Government and society.

In parallel in the Presentation Hall during the first day has been conducted award of the project “Innovations Alleys”. The expert jury has selected 12 projects-finalists, which have taken part at the exhibition “Internet-2013”, where guests of the event had opportunities during the whole three days to get acquainted with talented teams and their projects. Winners are: Taberna Hub, Telemedica, Алитикс, Hello Local Media, Plan4u, Zang — mobile voice dating, Opiner, Gruzopoisk, Voxxter – guide for the city tourist, Pizzabtn, Indigo Kids, Miiix.

It is important to note the exhibition “Internet-2013”, which was full of numerous various stands and activities from partners.