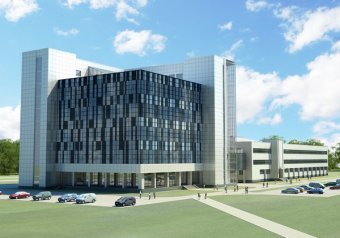 The residents for IT-Park in Naberezhnye Chelny are being selected. The regional media report on it specifying August 30 as its opening date. On the occasion of forthcoming opening the meeting of the industrial park Deputy Director Ramil Ibragimov with future IT-experts - the students of Kazan Federal University affiliation was organized.

Internships in IT-park resident companies with possible employment was discussed at the meeting, as a profession related to information technology is becoming more and more popular in Tatarstan year by year. Students point out not only prestige but also the profitability of the profession.

It is assumed that the new IT park will created over 1500 jobs. The residents will develop software and other products in the field of information technology.

During the construction the shortcomings of Kazan park were taken into account. So, for example, the Chelny will have no difficulties with parking spaces including at least a thousand. Spectacular and austere form of the building accords with the architectural style of the city, by the way, its views can be enjoyed in the panoramic elevators and through the huge stained glass windows. The interior of the IT-park will combine wood and metal.

Azat Tukhvatullin, the designer says: Implementing this project we would like to do something unlike Kazan IT-Park. We would like to attract as much heat as it is possible here. We want to create a kind of Mecca for young, progressive people who would feel incredibly comfortable here.

But the main thing is, of course, not a building, but the people - young and creative. They will make new steps in the field of high technologies. And the IT-Park will create all the conditions for this. In August there will be a post office, banks, conference and meeting rooms. To do business the residents will not have to leave the building. In addition, a business incubator will be created where young entrepreneurs can get advice and assistance of experts.

Ramil Ibragimov, the Deputy Director on Development of the Technopark in high-tech says: The business incubator resident participates in the selection to have a right for accommodation in the business incubator. Actually this can be any individual, it may be a student and a pupil, or person of absolutely any age having a great idea, a well-written business model, and who is able to defend this idea in front of the experts.

The future residents are invited to Kazan IT-park for the selection up to April 8. However, the names of some of them are known today. For example, the Octopus technology company develops software and sells it in 40 countries. Kazan resident counterparts also expect to have a place in Naberezhnye Chelny. So the space of the future IT-park will not be empty.