Skolkovo discussed venture business in the sphere of space 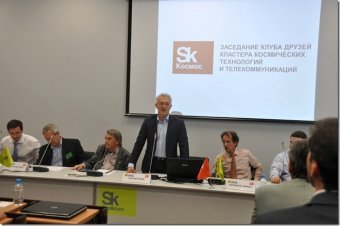 The Friends Club of Skolkovo Fund’s Space cluster held a meeting on the venture capital investment in the aerospace industry. It was the fourteenth meeting of Space cluster’s Friends Club and it was focused on three themes: the problems of Russian aircrafts certification according to European standards (Airbus), the prospects of WIG development that was popular in Soviet years, as well as the development of venture capital investments in the aerospace industry, the website of Skolkovo says.

The meeting was chaired by the Director of the cluster Sergei Zhukov.

The main speaker on venture was Dmitry Manakov, the managing director of MC Ergo Omnis who spoke on International Venture Fund of space technology. Manakov drew attention to the difference between the current stage of space technology development and the second half of the twentieth century. The difference is that there are more 100% private projects in the industry from scientific and financial point of view. There are projects that gained worldwide reputation among them such as Space X, Bigelow Aerospace, Virgin Galactic and others.

Such enterprises, according to Manakov, provide opportunities for the development of a wide range of small innovative and venture capital projects. Private investors in the space industry signify that there is a venture investment infrastructure. Even the new technologies created by university students could be of venture capital investors’ interest, - Dmitry Manakov said.

The Managing Director of MC Ergo Omnis believes that the evolution of the space industry opens up new possibilities for the creation of international venture funds in aerospace technology. He presented one of these funds, Runway Capital Partners, where he holds the position of managing partner. The advantages of international venture capital funds in the space industry, Manakov said, lies in the fact that the management and investors of these funds have enough experience which will help to answer many questions facing the new innovative projects and major Russian companies operating in the aerospace industry.

Manakov said that an average venture fund gets from 2 to 3 thousands of proposals for cooperation a year in the form of a business plan (not less than a thousand a year for sure). Each of these business plan is a document of about 50 pages, and it is just impossible to read it from cover to cover - Dmitry Manakov said.

The investor explained that a part of the projects is rejected at the first stage, according to criteria such as the required amount of funding (it cannot exceed the limits of the fund for a project) and others. The following is of venture capitalists’ interest: materials with specific and desired properties, instrumentation and sensors, telecommunications equipment, software applications, launch vehicles, new types of rocket fuel, aircrafts, nano-satellites, biomedical equipment.