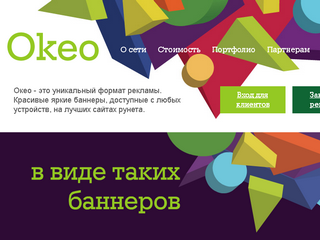 Bricolage fund for seed financing and startups' incubation that operates under a center of new technologies and technological entrepreneurship Digital October has invested in Okeo advertising network. At the present stage of operation Okeo company is estimated at $2M. The total investment and shares distribution is not disclosed.

World Class, White Wind Digital, Renaissance Insurance, Sotmarket, Rost Bank and many others became the company's customers during the first three months of its operation.

The project’s peculiarity is the use of two notable advertising formats - billboard (900x250) and full-screen (100% of the screen). These formats enable to convey the advertised brand in the best way, and at the same time to go directly to the website.

Alexei Pisarevsky, Okeo’s CEO, shares the plans of the company saying that the attracted investment will be used to develop an automated system allowing customers to buy the best clicks with proper settings up to demographics and search phrases.

Dmitry Repin, the General Director of the Digital October Center, has expressed his opinion on the project: Okeo aims at a very attractive and large media advertising market. In 2012 the Russian Internet has become the largest in Europe according to the number of users. At the same time the segment of media advertising is growing rapidly. The market experts estimate that the volume of Internet advertising in terms of money has already exceeded the scope of advertising in the press. Okeo uses advanced technologies of media advertisements targeting, which allows it to significantly increase the advertising campaigns’ efficiency.