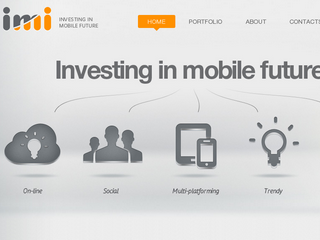 IMI.VC investment company that finances startups at early stages of development and founded by Igor Matsanyuk attracts $75M from Michael Vinchel, the founder of IC Prospect and one of the first investors of Mail.ru Group.

IMI.VC has invested in start-ups using Matsanyuk's money, who earned about $80M from IPO Mail.ru, but according to the founder of the company the money is not enough and it was decided to find new partners with the help of Michael Vinchel and Gregory Finger. However, Vinchel offered to invest his own money in the company. Finger will take over as the chairman of IMI.VC's board of directors.

There are not so many funds in Russia, and it is not easy for Russian startups to attract investment when at early stages of development, - Matsanyuk says. IMI.VC (In Mobile Investment) was established in 2011, the company supports start-ups in the mobile and Internet market. Among successful investments are investments in Farminers incubator and Game Insight games developer. In addition, the portfolio of IMI.VC includes about 20 companies and more than half of them have been financed through Farminers.

The General Director of IMI.VC Mikhail Vinchel was among the first investors of Mail.ru Group and after its IPO invested in Buran Venture Capital company and the iTech Capital Fund. According to Vinchel, IMI.VC team is one of the strongest in the mobile and Internet markets: We invest in people we like, who are engaged in projects interesting to us.

Investors of venture capital funds usually invest by certain amounts as finding interesting projects, while Vinchel transferred $75M at once to IMI.VC, Matsanyuk says. The money will go primarily to the start-ups invested by IMI.VC before.

The team of IMI.VC is specialized in computer games and in the Russian Internet, and it will have to prove its worth in other areas of the technology market, the senior partner and founder of Runa Capital Sergei Belousov says. Matsanyuk's team focuses primarily on mobile devices and social networks, the investment manager of iTech Capital Nikolai Davydov adds. According to him, Matsanyuk has strong projects in Farminers incubator that focus on the consumer market. At the same time Vinchel, Finger and Matsanyuk remain the investors of iTech Capital and continue to work with the fund, Vedomosti quote the words of Davydov.