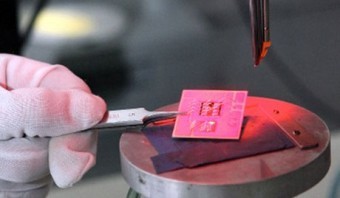 According to the results of the 2013, the portfolio company of RUSNANO “Quantenna Communications”, one of the global leaders in the sphere of semi-conduction solutions for Wi-Fi networks of new generation, received a range of prestige global awards. The company became an owner of CES Innovations Design band Engineering Award, Fierce Innovation Award и Global Semiconductor Alliance (GSA) Award, and also entered the rating of the Red Herring Top 100 Global.

The award “Innovations Design and Engineering Award” is awarded annually since 1976 within the “International Consumer Electronics Show” for development and creation of innovation goods in the sphere of consumer electronics. Firstly laureates of this award become companies, which for the first time joined in one product various technologies or principally improved initially existed on the market solutions. Te expert committee of the award, consisting from independent engineers, technologists and specialized journalists, notes products of the “Quantenna” for the fourth year.

This year the company received the award for “QSR1000” – chipset based on the standard 802.11ac, the only one solution in the branch with support of architecture 4Х4 MIMO (four independent receiving/transfer channels)
The award “Fierce Innovation Award: Telecom Edition” in nomination “Home Networking” has also been awarded to “Quantenna” for the chipset QSR1000. By this award the founder of the award, the portal “Fierce Markets” traditionally notes innovation developments in the sphere of telecommunications. Firstly the award is expected for solutions’ developers for wireless and cable communication, and also cable television and network support. The peculiarity of the “Fierce Innovation Award” is in the fact that the award’s jury consists exclusively from representatives of the largest companies-operators: AT&T, Comcast, Telia Sonera, Verizon, etc.

The Global Semiconductor Alliance (GSA) Award has noted other solutions of the “Quantenna”. In particular, the chipset based on the standard 802.11n. This award GSA annually awards companies for impact in development of global semi-conduct industry. The “Quantenna” became the owner of the award in nomination “Start-up to Watch 2013”.

One more recognition of achievements of the “Quantenna” became the company’s including in annual rating “Red Herring Top 100 Global”. It was founded in 1996 by publication “Red Herring”, which specializes on information about technology innovations.