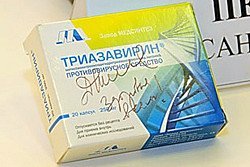 The Russian President Dmitry Medvedev has recently signed the order to the Skolkovo Fund for funding in the amount of 149 M RUR to complete the work on Triazavirin innovative medicine, a domestic antiviral medication of new generation, created as part of the Ural pharmaceutical cluster.

The Sverdlovsk region governor Alexander Misharin reported on Triazavirin implementation work to Medvedev during the task meeting. As it is known, the medicine, the mass production of which is prepared at the Ural pharmcluster enterprises, was previously included in the Skolkovo Fund support program. Promotional work and regulation tests come to the final stage, after which the medicine can be put into mass production.

Governor Alexander Misharin drew the RF President’s attention to the fact that the launch of Triazavirin, given the situation with the predominance of import medicines in Russian pharmacies, can be an important step in the implementation of effective policies by the head of state to protect national interests in the field of the RF healthcare system.

Dmitry Medvedev supported the regional authorities’ efforts to revive the pharmaceutical industry in the Sverdlovsk region. Following the meeting, Russian President has signed the order to the Skolkovo Fund for allocation 149 M RUR to complete the work on Triazavirin, said the Sverdlovsk region Government official website.

The pharmaceutical cluster of Sverdlovsk region gets good investments.