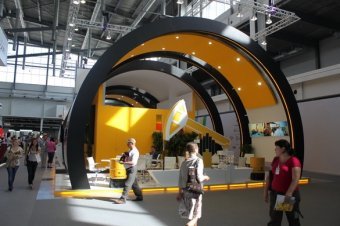 Almost all experts that met at a roundtable devoted to the opening of Ural International Exhibition of Industry and Innovation on July, 12 say that INNOPROM doesn’t have a clear strategy. The organizers are not successful in attempt to combine industrial exposition, entertainment shows and a political platform. As a result, this project is more of public image than profitable. According to the companies you can barely find new partners at the show, not all framework agreements become commercial contracts, and really breakthrough technologies can be seen at only 5-7% of stands, Rossiyskaya Gazeta says.

The global trend is the specialization of exhibitions, and we are trying to take a broad front, showing everything from cups to excavators. It does not give visitors an opportunity to concentrate. - comments Vassili Burago the representative of Ural Compressor Plant.

His colleague Andrew Kuzvesov from RTI Ural plant adds: INNOPROM should not be a gala event. Authorities must see that the majority of innovative projects are implemented through loans. Therefore, businesses need support in taxation and other preferences.

We must take in western approach to innovation. We need to understand the expectations of authorities, participants and visitors concerning the exhibition, - then it will be clear how arouse their interest - says Alexander Makarov, the presidential adviser of Ural Chamber of Commerce.

The question of how to do it within the budget (213 M RUR, 100 M of which are investments from the Government of Sverdlovsk region, the rest - contributions from participants and sponsors) is not answered. Maxim Zverkov, the CEO of Formica group of companies (the operator of the exhibition), assured that all suggestions will be considered, but called the companies to take the question about the preparation of stands and business programs more seriously. If companies clearly understand what to expect from the exhibition, they will get the result.

The conception of INNOPROM brand is to be developed. This is an Industrial Exhibition but not a Congress of innovators, and it is not regional but of national scale. Our ambitions go further - we are ready to compete with Hanover, where the world's largest industrial fair takes place. We do not want to dictate to manufacturers what direction to develop, our task is to bring people to show their prospects - he stressed.

Another thing is that is often very difficult to get information from the participants: what place they want to choose, what to display, what speakers are they interested in? Russian habit to put it off plays an important part – the preparations start two or three weeks before the start of the exhibition, and not for six months or a year, as it happens around the world. – complains the representative of exhibition’s operator.

This year the organizers are trying to make not only a status forum due to federal officials’ presence, but interesting as well. Businessmen experienced in innovative projects promotion, futurologists, scientists, forecasters, world-famous inventors, industrial designers will come to Ekaterinburg. In addition, the quality of exhibitors’ composition will change. A large number of international and Russian companies and permanent participants will expand their expositions.

According to Maxim Zverkov, Ural project should become Russian Davos (like St. Petersburg Economic Forum), and be of industrial orientation.