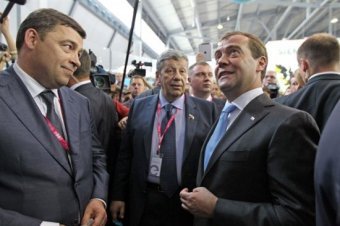 The first day of Innoprom ended. It was most eventful on the number of VIP-guests and the most hard in terms of personal inspection.

There was a full house in the exhibition halls in the morning, almost all the regional political and business elite guests were among the visitors: UFD leaders, the presidential envoy, factory directors, deputies, representatives of trade and professional associations.

One of our leading companies engaged in transportation of natural gas, signed an agreement with Ural Federal University, - said the Governor of Ugra Natalia Komarova. - We, in turn, are going to update the agreement between the District Government and the university to establish a center for senior executives training. I listened very carefully to the information about the development of equipment for fire-fighting, which was represented on UrFU’s stand. Ugra has a large area and needs to be protected from fire every season. Prototypes that identify explosives are also very interesting. Industrial park with its developments represents our district at Innoprom.

The first part of the day was devoted to the forecasts - well-known scientists, public figures and futurists talked about future science and industry. At the same time the Ural Cup of industrialists started, that was supported by the Ministry of Industry, Infrastructure hub and ASI. Russian Prime Minister Dmitry Medvedev arrived in Yekaterinburg at 14.00 local time, looked at few stands, and then participated in a plenary session and met with representatives of the Ural business. The program of the first day ended with the formal reception of Sverdlovsk region governor in the Literary Quarter.

About 10 cooperation agreements were signed during the first day of Innoprom including those between Chelyabinsk region and the Skolkovo Fund; Sverdlovsk region and SC Russian Roads; Pipe metallurgical company and Siemens. In the presence of top officials UrFU and Siemens, SEZ Titanium Valley and NPP Mashprom initialed their agreements as well as Development Corporation and UrFU, Uralvagonzavod and Bombardier Transportation. During the meeting of the coordinating committee for the development of nanotechnology in Sverdlovsk region, plans to build nanocenter until the end of the third quarter were announced. UVZ will be the investor of the project.

Dmitry Medvedev, Prime Minister of the Russian Federation: I am glad that there are such events. There are several forums where large international companies conclude multibillion-dollar deals, but it is important that the there are federal and regional exhibitions, where every businessmen could come to and show himself with no excessive complexity and without paying enormous money.