Moscow Coworkings to be networked 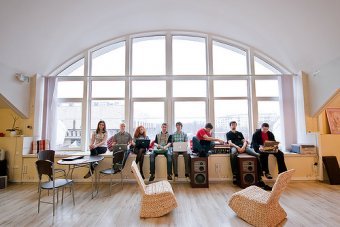 Town council launches Moscow. Coworking 2.0 program and its main goal is to coordinate the activities of private small and large businesses, including public companies. Deputy Head of the Department of Science, Industrial Policy and Entrepreneurship Andrei Uvarov told The Village portal about this news.

The program will be based on an extensive coworking network all over Moscow, consisting both of existing private clubs, and of sites created by authorities. All temporary jobs will be joined into a single club system and it means that a resident of any private or municipal coworking will be eligible to work in any other institution of the network.

The main feature of city coworkings is that the authorities want to unite small business owners and employees of large corporations. In our opinion, western coworking system that came to us needs some modernization. This is due to the fact that the state plays an important role in our economy, and there should be a guide for small businesses in the world of largest state-owned corporations and enterprises - said Uvarov. State coworkings will be created on the basis of large enterprises, where several hundred people can work together.

Regular events will take place in order to organize companies networking: conferences, lectures and seminars on business development in Russia. The department of science, industrial policy and entrepreneurship will conduct these activities. Office furniture, appliances and electronics will be purchased by the coworking organizations.

A winner of the tender for a study of Moscow coworkings and their effectiveness announced by the department will be named within the next few weeks. According to Uvarov, this costly research (they allocated 8.6 M RUR) is needed to understand the demand for a new type of working space in Moscow.
The pilot project area was opened at the PMT MICCRI (Moscow industrial and commercial center of regional integration) - Warsaw highway. This coworking has the working title of Club Nagatino. The PMT has been chosen because it is in quite a desolate condition, and it definitely would not be worse due to our work. In this example we want to show that even the worst departmental enterprise can become interesting and cool - Uvarov commented on the choice of officials. There are many offices and warehouses in the building. The first event was held there in June 26-29 – live broadcast of TED Global 2012 conference from Edinburgh.

Small and medium enterprises in Moscow may lose rental benefits

Private capital for the development of entrepreneurship in Togliatti