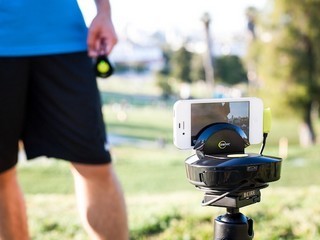 Investment Company Grishin Robotics that was created last year by the CEO of Mail.ru Group Dmitry Grishin has invested $500K in the development of a robotic video device Swivl. Swivl gained most popularity in the education industry.

Funds received from Grishin Robotics will be used to complete the development of the second generation of Swivl, as well to expand device opportunities through integrated cloud video services. The key improvement will be the support of iPad and Android tablets.

Swivl is a winner of Best of What's New Award by Popular Science magazine, and several awards at Consumer Electronics Show 2012. There are over 10K copies of the robotic video device sold worldwide, the development of which was supported by the company at IndieGogo that attracted more than $25K from nearly 300 investors. The cost of the current version of Swivl varies from $149 to $199.

Swivl has started working on a new version of the robot that was tested as part of the KickStarter campaign at the beginning of 2013 that brought the developers over $150K from more than 1K investors.

The global educational industry is undergoing huge transforming changes, and robotics plays an increasingly significant role in this process. Swivl represents a rare combination of strong technologies, beautiful design, and affordable price, having good prospects in the mass market, - Dmitry Grishin says, the founder of Grishin Robotics, co-founder and CEO of Mail.Ru Group.