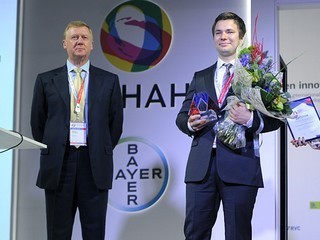 Reception of applications for obtaining Russian Youth Prize in Nanotechnology started. The prize is awarded for the development and implementation of a new nanotech solution, the production volume of which totals at least 3M RUR a year.

Any Russian Federation citizen under the age of 35 who is not a member of the Award Directorate can win the Award. The prize pool in 2013 is 300K RUR.

To participate in the competition you need to fill in a nomination form and send a set of application materials to youthprize@forinnovations.org. Applications for the award are accepted until August 31, 2013.

The prizewinner will be announced at a ceremony to take place in the framework of international forum Open Innovations in Moscow from October 31 to November 1, 2013.

The prizewinner in 2012 was the Deputy General Director of Akela-N Company Sergey Potapov. He was awarded for participation in the development and manufacturing application of xenon narcosis console XAC-01 and therapeutic xenon circuit XTC-01.

Russian Youth Prize in Nanotechnology has been awarded since 2009 and gave young developers an opportunity to declare themselves, attract the attention of potential investors and representatives of Russian development institutions.