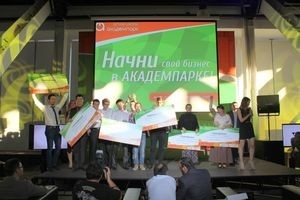 A contest with money prize became ending event of Summer School 2013. For the first time during the history of innovation schools of the Academy Park participants could pretend to money prize. According the results of the projects` presentations the sum has been divided between all the participants.

In September, 7 on the 13th floor of the Academy Park Information Technologies Center a competition for the money prize has been held. Almost for several days before the contest conduction the prize fund in amount of one million rubles has been added 100,000 rubles and comprised 1,100,000 rubles. Developments of claimants for the money prize have been estimated an expert committee, in which entered representatives of innovation society of the Novosibirsk.

After all six projects have been presented, there has been conducted an online selection. Jury members had an opportunity to share the sum of the prize between several participants, or give money to one participant. In the result none of teams has been left without a certificate on this or that sum of money.

The project “development of peptide vaccine for treatment and preventive measures of breast cancer by domestic animals (dogs and cats)” received 50,000 rubles, software for processing and construction of marketing analytics “MERKU.RU” received 70,000 rubles, authors of a development of portative automatic NMR-analyzer and a diagnostic method for cancer received 100,000 rubles, team with a project of running flow-meter for oil well pumps received 130,000 rubles. Manufacture of biohumus with the help of rain-worms, the project of the oldest participant of the Summer School, according to jury, has been awarded by 220,000 rubles. The largest sum – 230,000 rubles – according to experts received developers of a mobile application “Happstar” for creation of questionnaires.

As noted the director executive of the Fund “the Academy Park`s Technopark”, director of the Summer School Aleksey Logvinsky, “we are planning that all the participants will become residents of business incubators of the Academy Park, for we could give systematic assistance for projects` development”.

According to results of a cote the money prize has been distributed between competitors not in full amount. 300,000 rubles are transferred to the prize fund of the Summer School of the Academy Park-2014. Yet today organizers start to prepare to a new selection, this is why volunteers to take part in the next innovation school can address to the Academy Park.

Additional prize for three finalists of Summer School became an opportunity to go to Boston and take part in acceleration program StartUp Access. Thanks to grants from organizers, companies of RVC and the Academy Park, the educational program will be free. For certificates award on the ceremony of closing have come the managing director of StartUp Access Yelena Kadeikina, and director of strategic communications department, member of the board of directors of the “Russian Venture Company” Yevgeny Kuznetsov. “The main thing than I have noted in the projects` presentation is that participants` eyes were so bright. This is very important”, - said about her impressions Yelena.

26 projects entered the final of the Academy Park summer school

School for young innovators is opened in the Novosibirsk Technopark