Dmitry Medvedev: Development of “Skolkovo” will be continued 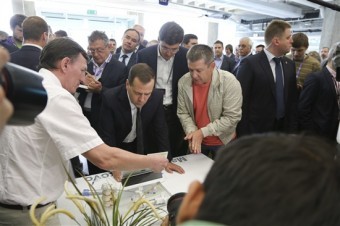 “We will continue development of “Skolkovo” Innovation Center and other innovation projects and technoparks realization”, - said in the article by the Prime-minister Dmitry Medvedev, which has been published by Vedomosti.

In the article, named as “Time of simple solutions has gove”, the Head of Government says about reset of import taxes for scientific equipment and materials, and calls large Russian companies to invest money in science more actively, and Government – find opportunities to stimulate such investments.

Situation in the global economy, and, correspondingly, in Russian economy, improves slower that it was expected, says Dmitry Medvedev. Growth rates of Russian GDP this year most likely will not exceed 2%. Since 2009 this is lower than in the global economy on the whole. Increased costs of entrepreneurial activity make unprofitable continuation of production at a significant part of old capacities, and also realization of serious investment projects.

Production increase is supported almost by realization of large investment projects with participation of Government and controlled by the Government companies, increase of workers earning in the budget sphere, widening of subsidies scale in agriculture and a range of other spheres against high prices for oil.

But this development resource is limited due to its dependence of keeping advantageous oil environment.

Actually we are situated on the choice structure, says the Prime-minister. “Russia can continue very low motion with close to null rates of economy growth, or to make a large step forward. The second way has some risks. But following the first scenario means supposed opportunity of keeping the already achieved welfare – is more risky. This is the direct way to its loss”.

Entrepreneurial freedom, good environment are required condition for modernization and innovation development, is said in the article, publication of which coincided with conduction in Sochi the International Investment Forum. “It is required to create reproduction system of commercially new technologies, leading to increase in labour productivity, improvement of ecological safety, convenience for customers. The main barrier is quality of our regulatory sphere. In the near months we will end up formation of required legal base”, - sys Dmitry Medvedev.

Nowadays our access to leading foreign technologies is limited. By various reasons: policy, customs rules or regulation. Import of any technology into Russia is more expensive than our competitors have. “I consider it possible to reset taxes for scientific equipment and materials, widen practice of grants and subsidies from the budget offering for import of scientific equipment, parts and materials for scientific investigations”, - notes the author.

“We will continue development if the Skolkovo Innovation Center and realization of other innovation centers, technoparks, - it is said in the article. – Our large companies and investors should more actively invest funds in science, establish their own Universities. Let it be established Institutions or at least cathedra from “Gazprom”, “Lukoil”, “Rusal” and “Rosneft”. And Government should think how to stimulate such investments, perhaps due to tax decrease”, - resumes the Head of Government.