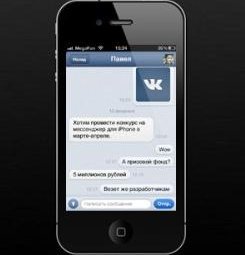 VKontakte management announces the launch of the iPhone messenger contest, the social network willing to pay5M RUR for.

Competitions can encourage the best CIS developers, avoiding their manager’s involvement. As the part of this contest we are giving iPhone developers all the server-side API and graphics infrastructure, and they can just write code without wasting time on routine - head of the VKontakte contest Pavel Durov commented on the news, adding that he will try to do the task to understand the participants better (of course, out of the contest).

The social networks management will provide developers with the interface and structure of the future messenger - its main screens and interface elements are already drawn. Participants are to implement the software using VKontakte API during the period from March 9 to April 20, 2012. The prize fund of 5M RUR will be distributes among the best applications published in the App Store. The organizers promise to make the process of judging the most transparent with open discussion of each application in a competitive group of all participants.