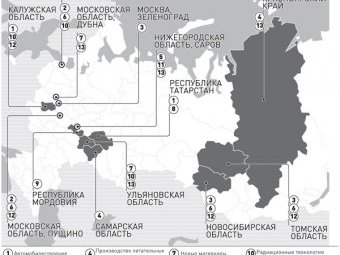 Ministry of Economic Development experts have prepared a draft on pilot programs for the development of innovative regional clusters. There are 25 of them in total, but only 13 of them will receive state financial support. It is planned that the federal budget will allocate 25 B RUR to them during five-year period starting from 2013.

The list of projects, which must be approved by the government, was made by a working group to develop public-private partnership in innovation under the Government Commission on High Technologies and Innovations. The group included representatives of the Ministry of Economic Development, RAS, Kurchatov Institute, Moscow City Hall, the Skolkovo fund and other structures related to the PPP, Innovation and Finance.

World practice shows that the national innovation system cannot be built without the establishment and development of cooperation between universities, research centers, government bodies and local authorities, institutional investors. PPP projects are the key to the development of such cooperation, - said Catherine Schapochka, the Director and Head of the Department of PwC in Russia to provide services to state and public organizations. - In addition, the creation of PPP is one of the most effective forms of implementation of innovation policy in terms of budget deficit resources. Investments in innovation are classified as risky, and therefore, the state creates a balance to support private capital.

We would recall that the selection of pilot projects of innovative regional clusters is on behalf of Dmitry Medvedev and was initiated by him last November. After the contest that had been announced in March, the Ministry of Economic Development received 94 bids. As a result of the expertise, 37 regional clusters’ programs were selected and received high assessments for the main areas of their specialization. 25 projects came into the final.

- Ministry of Economic Development work on the creation of innovative regional clusters has a good future, as it presupposes state support in high technology - says Daria Abramova, the Head of Marketing Communications at Orange Business Services in Russia and CIS. - Public-private partnership is especially important as the development of even better commercial projects is invariably hampered by enormous capital costs associated with buying expensive high-tech equipment or the conduction of basic research.

So far, 25 clusters are divided into two groups. The first group included 13 clusters the development programs of which are to be supported through grants from the federal budgets of RF subjects they are based in, the Ministry of Economic Development reports. At that, the allocation of federal budget funds at the total amount of 5 B RUR is also stipulated annually for five years starting from 2013. The second group included the remaining 12 programs, which required further improvement and would not get a penny from the Treasury at the first stage of their operation.

Priority is given to such industries as pharmaceuticals, medicine, nuclear and radiation technologies. The choice is not accidental. Russia has retained technological advance in these areas, due to the realization of which you can achieve competitive advantage, there are also appropriate qualified personnel. So in that sense we can say that the decision to support such clusters indicates the consistent policy - Catherine Schapochka emphasizes.
The proposals for the adjustment of federal and state programs to provide state financial support for the selected projects will be prepared and submitted on the basis of pilot programs for clusters development. Meanwhile, the Ministry of Economic Development is working through the issues of major state companies’ participation in the implementation of pilot programs. Vnesheconombank, HMLA, Foundation for Assistance to Small Enterprises in Science and Technology, Russian Venture Company, Rusnano, Foundation for the Development of the Center for the development and commercialization of new technologies are to be involved in the realization of pilot programs.

- The support of clusters is certainly a right approach, since it allows creating competitive environment with reduced costs. However, this cannot be fully assessed as a full-fledged PPP until the formation of clusters looks like a way to increase the attractiveness of the regions in the competition for direct investment - Alice Melkonian concludes.


At the expense of state, clusters which include steadily and long time growing companies (for 3-4 years), can turn into a potential point of economic growth.