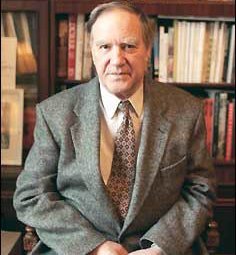 An eminent scientist Sergey Kapitza died at the age of 84 years in Moscow.

Sergei Petrovich has passed away today, - the CEO of TV Company Obvious and Unbelievable, Svetlana Popova said on Tuesday. Sergei Kapitsa was the anchorman of Obvious and Unbelievable TV program since February 24, 1973, and was included in the Guinness Book of Records as the presenter of the longest experience. It is impossible to list everything that Sergei Petrovich made for the benefit of science.

Kapitsa was born on February 14, 1928 in Cambridge: his father Peter Kapitza worked in Britain at that time and was Nobel Prize-winning physicist and engineer. The family moved to the USSR in 1935, where Sergei Kapitsa graduated from Moscow Aviation Institute.

In 1961 he became a doctor of physical and mathematical sciences. He was the senior Research Officer of P.L. Kapitza Institute for Physical Problems, professor, author of four books, dozens of articles, 14 inventions, and one discovery. The creator of phenomenological mathematical model of the hyperbolic growth of the population. He proved for the first time the fact of the hyperbolic growth of world population to 1 AD. One of the founders of cliodynamics. President of the Eurasian Physical Society, a member of the European Academy of Sciences, member of the Russian Academy of Natural Sciences, a member of the Presidential Council for Culture and Arts. Member of the Club of Rome, president of the interdisciplinary discussion club Nikitinskiy Club of Scientists and Entrepreneurs of Russia, a member of Manchester Literary and Philosophical Society. Honorary Vice President of public organization Eurasian Academy of Television and Radio. Kalinga Prize winner (UNESCO), the USSR State Prize (for organizing Obvious and Unbelieveble TV program; 1980), Academy of Sciences Prize for the Popularization of Science, the Government of the Russian Federation Prize in Education (2002), was the chief editor of In the world of science journal.

I feel sorry. He's a good comrade, a great popularizer of science. He was the great presenter of Obvious and Unbelievable, and Peter Leonidovich loved him very much (Sergey Kapitza’s father), - Nobel laureate Zhores Alferov said.

Sergei Kapitsa spent his life with unusual sports: swimming, diving, aviated, and went down into caves.

RAS Technopark in the south-west of Moscow

How will Naukograd be built

The genius of hacking