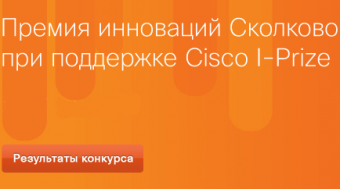 Yesterday, in September 17, 2013 in Hypercube of innograg Skolkovo there has been conducted the final of the second contest “Prize for innovations in Skolkovo with support of Cisco I-PRIZE”. In the course of the event with participation of partners Cisco and the Fund Skolkovo among six finalists of the contest there have been selected three winners, which received prizes in the form of gratuitous objective grants Cisco on the amount of 5,25M RUB.

The contest “Prize for innovations in Skolkovo with support of Cisco I-PRIZE” has been conducted in our country for the second time. The first contest, which has ended in May, 2011, has arisen much interest, in connection with which Cisco and the Fund Skolkovo have taken a decision to continue realization of this initiative.

According to terms of the second contest “Prize for innovations in Skolkovo with support of Cisco I-PRIZE”, participants of this contest could become only citizens of Russia, permanently residing in our country, and legal bodies, registered in Russia. About 70% of applications to take part in this contest, has been filed from teams and legal bodies, herewith the total amount of the competition society (more than 11,5 thousand people) has exceeded the analogues index of the first contest. Applications have been filed by citizens from 114 cities and villages of the Russian Federation. The highest activity has been displayed by Moscow citizens, St.Petersburg citizens, and Novosibirsk citizens (22% of all applications has been filed from them).

When selecting projects-finalists there have been considered the following criteria: market perspectives, novelty and originality, including expressed competitive advantages, actuality for Russian and global markets, probability of success, and scalability in a long-term perspective.

Thus, according to results of the contest`s final “Prize for innovations in Skolkovo with support of Cisco I-PRIZE”, the third place has been taken by the project “Automatic forecast system of infarct start “CardioSence””. The project received a gratuitous objective grants Cisco on amount of 750K RUB. The core of the project “CardioSence” consists in creation of a warning system of Miocardial Infarction. It is proved that during several days before starting infarct composition of parotid fluid changes. On the basis of this data there has been developed a prototype of an implant, which can be fixed at a patient`s tooth, not interfering in everyday life. The primary detector locates in a constant cooperation with parotid fluid, reveals features of starting infarct with the help of reading unit, realized in the form of a bracelet, notifying about a threat a patient and a doctor.

The second place (grant of the sum of 1,5M rubles) has taken an educational project RealtimeBoard. The project presents the SaaS-service, which allows using “virtual desks” for joint cooperation. Working with this service via web-interface, it is possible to paint, make notes and fix pictures and stickers, add documents from GoogleDrive and edit it at this “virtual desks”. Within the project is planned the integration of SaaS-solution with interactive desks and creation of a network with educational UGC-content.

Winners of the contest “Prize for innovations in Skolkovo with support of Cisco I-PRIZE”, who received a grant on amount of 3M RUB, became a project MedM. This is a platform for mobile monitoring of vital indexes. The platform MedM includes multi-platform mobile software for wireless data acquisition (Bluetooth, BLE, NFC, ANT+) from medical equipment and transfer of this data into cloud storage, and also service software for cloud data storage, API for integration with information systems and demonstration web-portal.

Ingria and Cisco have executed an agreement on cooperation