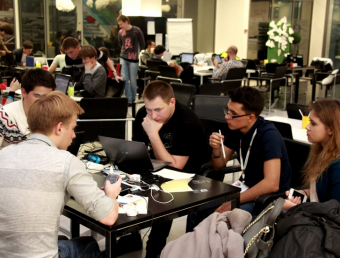 At the conducted on Friday “Tech Day” by Google the best specialists told about how to create qualitative mobile application, able to conquer summits of users’ interest chart. It has been offered to participants to solidify knowledge on practice – in the Kazan IT-park has been held the Hackaphone for mobile developers.

Hackaphone – is a type of Hackaphone – marathon for programming. The main idea of such event is creation of a team for working under the project in the shortest time, and then creation of the project itself. Hackaphone is focused on mobile applications and shows that in a true choice of a team and reasonable use of time, it is possible at least to create a prototype, and maybe even a completely working project. In the Kazan IT-park Hackaphone has been conducted not so long time ago, and even then it showed high interest of programmers in events of such format.

The conducted Hackaphone from Google was not exclusion. Two days have been devoted to it – October, 5 and 6. In the conference-hall of the Kazan IT-park have gathered the best mobile developers, in order to show their abilities. In October 5, several dozens of ideas have been promoted for discussion, among which participants have chosen the most interesting. After this participants have created teams in order to fulfill ideas into reality. Many things depended on the team’s list, and as a result in order to fulfill each idea participants created small groups, inside which started active discussion and development of an idea. The most numerable tea came from the second field of the Kazan IT-park in Naberezhnye Chelny. This team included representatives of the business incubator projects, who also decided to show their skills is mobile development sphere.

On Sunday evening, in October 6, there started a presentation of projects by teams’ participants. And though not all participants achieved the aim of operating application, the best of them have been noted by Google. According to Hackaphone, it is possible to create mobile application in the shortest period of time – it is important to have corresponding skills and developer’s talent. Hackaphone from Google attracted to participation professionals from various spheres – developers and designers. Everybody could get acquainted with like-minded persons, once again prove its professionalism and get new development experience.