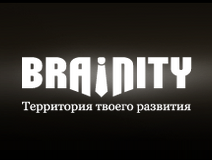 Starting with March 1, 2012 within the Brainer of the Year First Award for the development contribution a new nomination For the contribution to the progress of society will be established.

Up to this point only the authors of Brainity portal could become the candidates for the Brainy statuette, now business organizations can claim for the victory – it is a company, not an individual who is awarded For the contribution to the progress of society.

Organizations that implemented a social project in 2011 which involved more than 15 people who are not employees of this company can apply for participating in the Award in the nomination For the contribution to the progress of society. In addition, the project is to find media coverage (not less than ten sources). The Media Partners of the Award will assess the project.

We remind you that the second Brainer of the Year ceremony Award for the development will take place on April 6, 2012 in Moscow.

At the moment, the results of the third and final round of voting are summed up and the winners in ten different nominations are determined: in the field of PR, marketing, management, organization, economics, finance, psychology, etc.