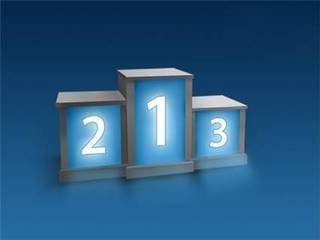 The study involved 83 regions of Russia. The leader of the rating, as in last year, is Moscow. It should be noted that for the first time, compared with previous studies, the gap between the capital and its closest competitors has been decreased to 15%. The second place was taken by the Republic of Tatarstan (the 4th place in last year ranking). The region is Russia's largest special economic zone that has four industrial parks, technopolis, 14 technoparks, etc.

The highest growth rates of innovative activity have been demonstrated by Yamalo-Nenetskiy Avtonomnyy Okrug, which was able to go up in the ranking by 25 positions at once. The elements of innovation infrastructure are being actively created in the Region. The funding of research and innovation areas has been increased in times. The region has considerable potential for innovation. Also, the high growth of innovation activity (10 items) was noted in Kemerovo and Belgorod regions.

The main losers of the rating include Moscow Region (fall in the ranking by 27 positions), Kamchatka (12 positions fall) and Voronezh region (11 positions).

In general, about 9% of participants saved their positions in the rating. About 42% of the regions have increased their activity. 49%, on the contrary, showed lower results than last year. The number of regions in the category of Low Innovation Activity compared with the previous year remained the same. The number of regions in High Innovative Activity category was increased by one participant. As a result, the overall rate of innovation activity in 2011 was almost at the same level (increased by 1.5%) as in 2010.

According to the President of NAIRIT Olga Uskova, It was the first year of studies when the overall rate of innovation activity was positive. We hope that we have crossed a kind of critical line in our innovative development. At least, we have tangible results shown in 2011 by many regions that were previously ranked as lagging, so we can face the future with optimism. 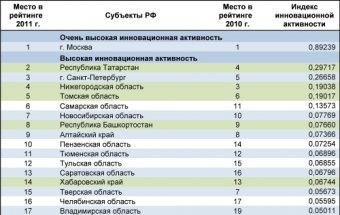 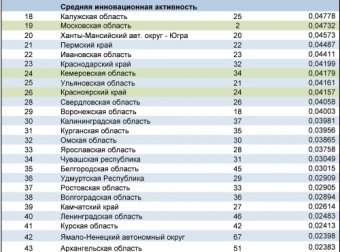 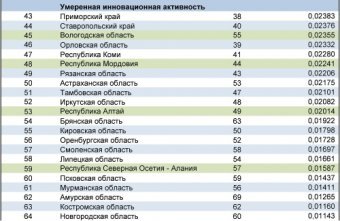 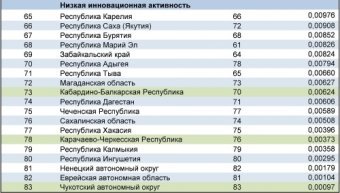 AIRR assessed the quality of innovation normative base