A discussion about small business support in Novosibirsk 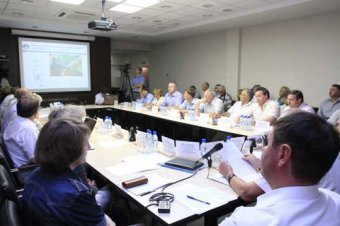 The first discussion about the budget for 2013 and the planning period until 2015 in the field of industrial policy, science and business took place in Novosibirsk. The issues of support for small and medium-sized businesses were discussed at the meeting; the amount of cash support and the creation of a business incubator were also discussed.

This form of debate on the main budget's parameters with a wider range of experts and townspeople is more relevant today - First Deputy Mayor Vladimir Znatkov noted. - The first consideration is for industry and entrepreneurship, those sectors that are budget forming and ensure well-being of the city. Then we will consider the expenditure items such as transportation, Housing and Utilities, social services.

During the discussion the citizens and experts suggested to support investment and innovation activities of enterprises, the development of small and medium enterprises, to strengthen the interaction of industrial enterprises and research organizations, supporting projects of young scientists and innovative companies.

The Head of the Department of Industry, Innovation and Entrepreneurship of the City Hall Vladimir Afanasyev said that the municipal support of innovation activities and investment projects of organizations of scientific-industrial complex will be continued in 2013.

It is planned to keep the amount of funds available to support projects of young scientists at the same level. The sum of grants was increased to 6 M RUR in 2012.

Two additional new forms of financial support were introduced based on entrepreneurs’ suggestions that were made during the discussion of the national budget last year. It is partial subsidizing of the cost of small and medium enterprises that produce goods for export, as well as subsidies in the form of municipal grants for novice businessmen.

Also, taking into account the suggestions of the participants of last year's discussion, the City Hall started to work on the establishing of a business incubator in Leninsky district of Novosibirsk.

The second business incubator to be built in Novosibirsk

Small and medium enterprises in Moscow may lose rental benefits