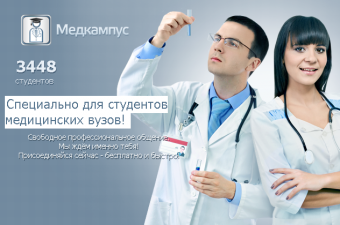 An online project in higher medical education Medcampus has launched and received its first participants. The project aims to create a platform for self-learning and interpersonal communication of Russian medical students with the ability to share photos, videos and audio.

The preparation of the project began in 2010; there are similar services in Europe and the United States. A distinctive feature of Medcampus, according to the creators, is the international basis - in addition to students from Russia, there are students and doctors from almost all countries of former USSR, as well as from France and Poland.

The launch of the website was prepared by Median company, which is already known for its social network Doctor at work (received $1M from Bright Capital Digital venture fund in June 2012) and eponymous electronic media that unite almost 52K physicians (34% of Internet active physicians in Russia).

This website will provide the implementation of tasks for a new form of training in the medical community - a virtual Medkampus Academy. It is an innovative approach to education that is being constructed on the principle of differentiated supply of knowledge with reference to specific examples. A lot of competitions, workshops and consultations are planned during the educational process.

Among the projects of Median company, which are under development, is also a medical News Agency MEDIAN (www.median-info.ru), consultation and preventive portal for patients Profilaxis (www.profilaxis.ru), international social network for doctors Doctor At Work (www.doctoratwork.com), Mutual Fund for doctors.