Afisha-Rambler gets 100% of Begun service 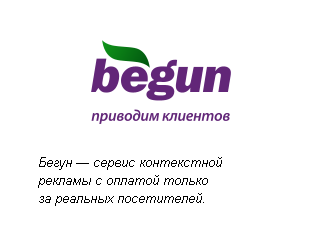 The incorporated company of Afisha and Rambler has signed an agreement with the holding company Finam and investment company Skagit, according to which 49.9% of the contextual advertising service Begun will be passed on to Afisha-Rambler, which will allow it to become the sole owner of the service. The deal has not been reported.

Following the transaction, the company intends to combine its services related to e-commerce on the basis of Begun service and an aggregator of online stores Price.ru.

We would like to consolidate e-commerce assets of our holding and create attractive products in e-commerce, - the CEO of the incorporated company Nikolai Molibog says.

As Vladislav Kreinin, the marketing director of Afisha-Rambler wrote on his FB page, Anton Terekhov will become the Director General of Afisha and Price.Ru, and will retain the position of the e-commerce Director of the combined company.

Afisha Company is in the market since 2002 and specializes in contextual advertising. The monthly audience of Afisha network (excluding the audience of external services and mobile platforms) is 27.7M users, according to TNS, January 2012.

The merger of Rambler and Afisha took place in July, 2010 when ProfMedia holding made the decision to consolidate Internet assets and to develop a single digital platform.

Afisha and Rambler set up a venture fund