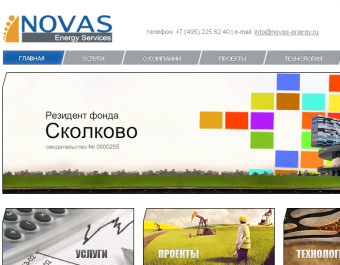 In November, 20 in Houston in the end of the first day of the conference “Total Energy USA” the Chairman of the conference received director general of the Company “Novas USA” award “For excellence in the sphere of innovations”. The Russian development has been recognized to be the winner of the contest, in which it shared the first place with the Company “Halliburton”.

On the conference the company “Novas USA” presented its patented technology of plasma-impulse influence, which is used for increase of oil-output in chinks. Such technology has been created by the team of Russian developers, who received in 2012 a grant from the Fund “Skolkovo” for further technology improvement.

Application of such generator with plasma-impulse influence has already helped in increasing oil-output in more than 200 chinks in Russia and CIS countries, and in more than 20 chinks in USA. Such effect has been achieved without use of any chemical agents, and in this connection such technology considers to be ecology-friendly. Using such plasma energy, a generator cleans a bottom-hole zone of a chink from sedimentary deposits stoppage and increases collector’s penetrating quality, and as a result grows oil output in chinks.

“For us this is a great honor and responsibility to receive the award on the conference “Total Energy USA”. When in March we have spoken on the conference “the Undiscovered Equities”, such technology has not been used in USA yet. At the moment we can present concrete results of plasma-impulse influence application approximately in 20 chinks on the territory of the United States of America”, - stated John Hemeller II, director general of the “Novas USA”.

Petr Ageev, director on strategic development of the “Novas Energy Services” has underlined that the project “Plasma-impulse influence on productive hydrocarbon layers”, developed by the resident of the “Skolkovo” – “Novas Sk” - has been selected as top-6 as innovation, eco-friendly and energy saving technology.

The Company “NOVAS” came in “Skolkovo” in 2011, and nowadays this technology has been used in more than 200 chinks. The American company of the Group “NOVAS” (more than 50% of shares belongs to Russian part) is already trading on the market with capitalization of approximately $50M. “The “Skolkovo” Fund help in development of this company by two directions. Within the existing technology we helped them in establishing contacts with American and Vietnam partners. The second direction of our granting support focuses on technologies of horizontal drilling, which are held in more sophisticated technological conditions, requiring the lesser diameter of chinks, advanced with bends and etc. It requires collaboration of technologies, including in direction of techniques’ miniaturization”, - said Oleg Pertsovsky, operational director of the cluster of energy effective technologies.