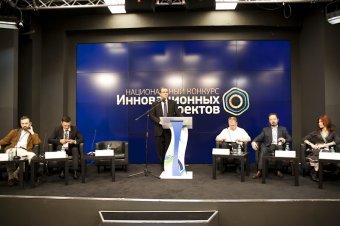 The second All-Russia business forum Youth and the Innovation Economy of Tomorrow took place on July 5, at Digital October Center in Moscow. The event became the final point of the National Innovation Projects Competition in 2012. The Forum was held in the format of an open public debate on the state of innovation environment and infrastructure in contemporary Russia, as well as the role of young innovators and entrepreneurs in modernization and transition to knowledge economy. Over 450 people took part in the Forum. The presentations of speakers caused active discussions in the hall. The meeting participants asked many interesting questions.

The following people spoke at the meeting: the Internet entrepreneur Alena Popova and Dmitry Zelenin (Managers Association) who thanked all the participants, experts and partners of the National Innovation Projects Competition in his welcoming speech and noted that the increased interest in the Forum is an indicator of positive changes in our society. In his speech, State Duma deputy Ilya Ponomarev noted that the main characteristic of the innovation environment is not the institutions, as it is commonly believed. The most important thing is people and their interaction. Yevgeny Kuznetsov (RVC) stressed that today's Russia has considerably increased the number of people who learned to play by the rules of modern innovative economy. Stanislav Naumov (the Skolkovo Foundation) spoke about the activities of the Fund. Anna Chapman (Venture News) raised the problem of obtaining funding from state development institutions to implement new projects. And Dmitry Knyazev (Department of Science, Industrial Policy and Entrepreneurship of Moscow) spoke on the programs of the Moscow Government aiming to improve the innovation environment in the city. Catherine Shapochka (PwC) raised the topic of creating Smart Cities and Smart Communities. Renata Akhunova (Global Innovation Access) live from the Silicon Valley spoke about the difference in approaches, and the contrast between the innovation climates in Russia and the United States.

Meetings of thematic sections and signing a cooperation agreement between the Managers Association and Technopolis Himgrad (the Republic of Tatarstan) took place within the Forum. The Forum ended with a solemn awarding ceremony of the best young innovators of Russia.

International Innovation Forum will be held in Saint Petersburg

The National Perspectives Foundation will give grants to young innovators