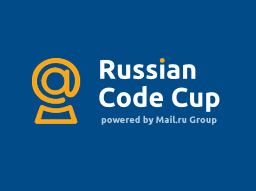 Vladislav Epifanov became the winner of the championship on programming Russian Code Cup which is held by Mail.Ru Group Company for the second time. He won the final round on Thursday.

The finalists, selected during four online stages, were supposed to solve six problems in four hours. Epifanov was the only one who managed to solve five problems.

The second place went to Natalia Bondarenko, and the third place went to Egor Kulikov. They, like some other participants, solved four final tasks and received less penalty points.

The prize fund of the championship Russian Code Cup was $18K. The winner of the competition received $10K, and the prize-winners who took the second and third places received $5K and $3K respectively.

The largest Russian social network VKontakte also held a programming championship in July. The prize-winners of the competition received a total of $60K and the winner was 16-year-old computer programmer from China Yuzhu Gu. Mail.Ru Group is one of the largest Internet companies in the Russian segment of the Internet. Mail.Ru Group includes free e-mail service and two instant messengers - Mail.Ru Agent and ICQ. The company manages two Russian social networks Moy Mir@Mail.Ru and Odnoklassniki and has significant share in VKontakte social network. Additionally, Mail.Ru Group develops e-commerce, including electronic payment system Dengi@Mail.ru.